Established in 1965, Head Start promotes school readiness for children in low-income families by offering educational, nutritional, health, social, and other services. Since its inception, Head Start has served more than 36 million children, birth to age 5, and their families. In 2018, Head Start was funded to serve nearly 1 million children and pregnant women in centers, family homes, and in family child care homes in urban, suburban, and rural communities throughout the nation. (More on Head Start)

The term "cumulative enrollment" refers to the actual number of children and pregnant women that Head Start programs serve throughout the entire program year, inclusive of enrollees who left during the program year and the enrollees who filled those empty places. Due to turnover, more children and families may receive Head Start services cumulatively throughout the program year, all of whom are reported in the Program Information Report (PIR), than indicated by the funded enrollment numbers.

The Congress of the United States authorizes the amount of federal spending for Head Start each year. The Head Start program is administered by the Administration for Children and Families (ACF) within the Department of Health and Human Services (HHS). Federal grants are awarded directly to public agencies, private nonprofit and for-profit organizations, tribal governments, and school systems for operating Head Start programs in local communities.

The Head Start program serves children, families, and pregnant women in all 50 states, the District of Columbia, and six territories. The table in this section presents the total actual funding awarded and funded enrollment of Head Start programs in each state and territory.

American Indian and Alaska Native (AIAN) funding is awarded to AIAN tribal governments. AIAN programs operate in 26 states, and in some cases their services cross state lines. Migrant and Seasonal Head Start (MSHS) funding and funded enrollment are shown as one total, as this program supports children and families who receive services in various states during the year. Thus, federal funding and funded enrollment for these services cannot simply be attributed to individual states.

1AIAN funding is awarded to American Indian and Alaska Native Tribes. For reference, the funding and enrollment has been split out by the state in which the Tribe is headquartered. Some Tribes serve children across state lines.

Each year, Head Start programs are required to submit Program Information Reports (PIR) on the services they have provided to children and families throughout the program year, including child, family, and staff demographics and program characteristics.

For a copy of the PIR form, detailed reports, and data sets for the 2018 PIR and prior years, and for further information, please visit: Program Information Report (PIR) 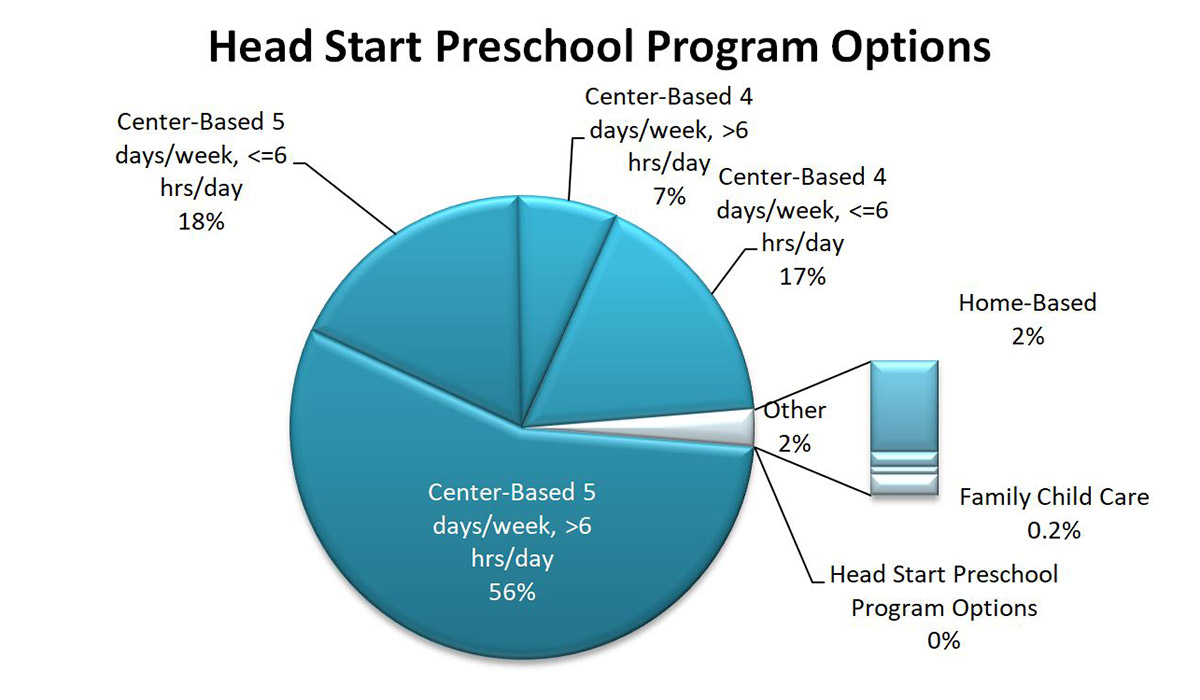 Head Start served a diverse group of children, families, and pregnant women. Thirty-seven percent identified themselves as Hispanic/Latino, and 30 percent were Black/African-American.

Services to Children and Families:

Head Start programs work with families to ensure they have the means to obtain health insurance, services for children with disabilities, adequate housing, job training, and more. In fiscal year 2018:

Head Start programs employed and contracted with 265,000 staff. Parents of current or former Head Start children made up 22 percent of Head Start staff.

Head Start® is a registered trademark of the U.S. Department of Health and Human Services (HHS)
Loading...